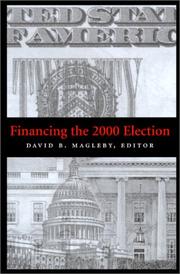 Financing the presidential general election / Anthony Corrado Financing the Congressional elections / Paul S. Herrnson and Kelly D. Patterson Throwing out the rule book: party financing of the elections / Diane Dwyre and Robin Kolodny Interest groups and financing the elections / Allan J. Ciglar   Financing the Election by David B. Magleby (Editor) in DOC, FB2, RTF download e-book. Welcome to our site, dear reader! All content included on our site, such as text, images, digital downloads and other, is the property of it's content suppliers and protected by US and international copyright laws%(). Throwing Out the Rule Book: Party Financing of the Elections DIANA DWYRE ROBIN KOLODNY FTER THE ELECTION, the political par-ties' campaign finance activities were characterized as "spitting on the umpire" because of the major parties' "contempt" for the Federal Elec-tion Commission's (FEC) attempts to enforce the rules governing cam-. Election Commission (FEC). For the presidential election, the parties’ national committees (the Democratic National Committee or DNC and the Republican National Committee or RNC) were each limited to $13,, i n coordinated spending for their presidential nominees. These.

4 Financing the Presidential General Election 79 Anthony Corrado 5 Financing the Congressional Elections Paul S. Herrnson and Kelly . The United States presidential election was the 54th quadrennial presidential was held on Tuesday, November 7, Republican candidate George W. Bush, the governor of Texas and eldest son of the 41st president, George H. W. Bush, won the election, defeating Democratic nominee Al Gore, the incumbent vice was the fourth of five presidential Turnout: % pp. This book, while a difficult read, lays out the Constitutional arguments for the legitimacy of the Supreme Court's decisions in the presidential election of I didn't vote for Bush, and I won't vote for him in November, but after reading this book, I can accept that his presidency, while controversial, is by: “Throwing out the Rule Book: Party Financing of the Elections.” In Financing the Election. Ed. David B. Magleby. Washington, DC: Brookings Institution Press, .